Each year, Sigma Kappas from across the nation plan an Ultra Violet Campaign to raise money for the Sigma Kappa Foundation.  They also take part in an annual Memory Walk with other community members to raise money and awareness for the Alzheimer's Association.  The Beta Theta Chapter annually hosts Paint-A-Sigma Kappa Masterpiece in which students on the Marietta College Campus can pay to either dump paint on or neatly paint a masterpiece on an active member, who acts as their personal canvas.  In addition the Beta Thetas also put on the Sigma Kappa Night Live to raise funds for the philanthropy.  For the Inherit the Earth philanthropy the Sigma Kappas volunteered to help The Castle, a local museum, with their landscaping needs. They also partner with the Washington County Women's Home and The O'Neil Senior Center to spend time with the elderly.  The Maine Seacoast Mission can also count on an annual donation of toiletries from the Beta Thetas.  At the end of the year, the Sigma Kappas show their thanks to the other Greek organizations on campus, the supporting faculty, and the community by implementing a Week of Giving.  Overall, the Sigma Kappas work hard to uphold their value of service. 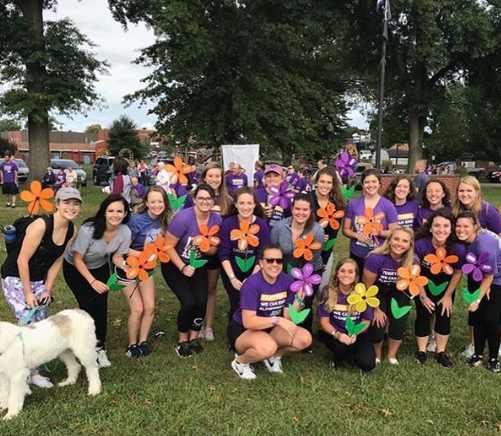